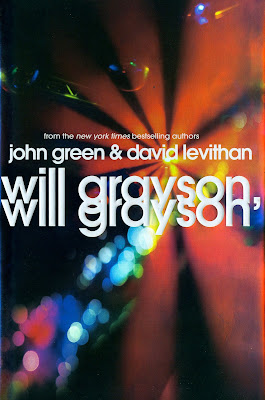 One winter night in Chicago, two teenage boys named Will Grayson meet by chance in an adult entertainment shop. Both Wills are juniors in high school and live in different suburbs. John Green’s Will believes that all problems and pain in life could be avoided by keeping quiet and not caring. His best friend Tiny Cooper is proof of what heartache can do, since Tiny is always in love with a different boy and always having his heart broken. David Levithan’s Will is angst ridden and doesn’t have any real friends, except for a boy online who he’s in love with. His closest thing to a friend in real life is a girl he doesn’t like all that much, their unhappiness with life their biggest thing in common. When the Wills meet, it seems like the most random thing that has ever happened. In a winter full of love, botched fake IDs, bands named after physics experiments, Will Graysons and an epic musical about love and all things Tiny Cooper, Will Grayson, Will Grayson is a hilarious collaborative novel about the things we can’t choose.

Man, that was a hard synopsis to write. I just finished Will Grayson, Will Grayson for the second time, and I’m a bit confused about how I didn’t burst out laughing the first time I read it, while I was in the quiet floor of my school’s library. This book is told through alternating chapters between the two Wills, Green writing one and Levithan the next. I loved this book the first time I read it, and this time I loved it even more. Of John Green’s books, I’d say this is the funniest. Tiny Cooper is hilarious without meaning to be. When Levithan’s Will asked what rhymes with ‘sodomy trial’ I didn’t so much as laugh, but actually belted out. Like a laughing goat. While some humorous books are only humorous, Will Grayson, Will Grayson also touches on bigger issues that are relevant to everyone.

John Green’s half of the book follows Will, who doesn’t want too much attention drawn to him, which doesn’t exactly work when you’re best friends with Tiny Cooper. Tiny is very big and very gay, and is focusing on writing a musical about his life story. I love Tiny and his quest to make the world better through his musical, and his and Will’s friendship is just wonderful. Of the female romantic interests in John Green’s books, Jane is my favourite. As with all of John’s books, I love how different things play a role in the book’s themes, like Schrödinger’s cat. The plot was well paced and always interesting, even if when writing out the synopsis it didn’t sound like a lot happened. David Levithan’s Will is angry and sarcastic, but I liked how we get to see different sides of him as the story progresses. I also liked how he didn’t fit into any typical stereotype of a gay teen. In the conversation between the authors at the end, I thought it was really interesting how David Levithan explained that he wanted his Will to be in the middle of things. You often see teens in books diagnosed with having depression, but Will shows what happens afterwards. It was also interesting how he said that Will writes in lowercase because he sees himself as a lowercase person.

I’m sure a lot of people will find the musical ridiculous, but I thought it was wonderfully hilarious. The first time I read WGWG I wasn’t very keen on the last scene, but this time I enjoyed it more, especially considering how it relates to an earlier conversation between Levithan’s Will and Tiny. A common complaint I hear about this book is that the two Will Graysons don’t have more of a relationship, but I liked reading about the two separate characters and their separate lives. Whether you’re a fan of John Green, David Levithan or have never heard of either, Will Grayson, Will Grayson is an original book full of humour and insight that I enjoyed immensely.