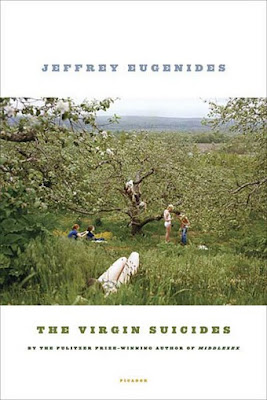 In the 1970’s, the five Lisbon sisters killed themselves over a yearlong period. The first was the youngest, Cecilia, and eventually the other girls followed. To the neighbourhood boys in their Detroit suburb, the Lisbon girls are a beautiful mystery, and years after their deaths the boys are still trying to piece together what happened. Who were the Lisbon girls, really? What was life like in their stifling and strict house? And why did they choose to end their lives in such a way? As the boys try and seek the truths that they will never find, they will never be able to stop loving the Lisbon girls.

I originally wanted to read this book when I was sixteen, but my hold came in at the library around the same time two girls at my high school killed themselves in a rumoured suicide pact. While the idea that it was a pact didn’t turn out to be true, I obviously wasn’t in the mood to read a book about teenage girls killing themselves at that time. Five years later I finally bought The Virgin Suicides. If I had read it when I was sixteen, I don’t think I would have got this book. It’s been a few weeks since I finished reading it, but I’ve been putting off writing the review because I find it a difficult book to describe. That might be because The Virgin Suicides is different from so many other books I’ve read before. One of the things that makes this book so unusual is that we don’t get to know any of the characters as deeply as we usually would. This isn’t because they’re not fully developed, but because we just don’t get to see who they really are. There is no actual protagonist. Instead, the book is told from the perspective of multiple boys in the neighbourhood, in the first person plural point of view. You never get to know any of these boys as intimately as you would with the average protagonist. The person the reader knows the most about is Lux Lisbon, who is still an enigma to us. Like the boys in the book, we only get to know Mary, Therese and Bonnie Lisbon through glimpses. A lot of people look for novels that show them a character they can relate to, and I don’t think this book will provide them with that. However, while there is so much we don’t know about the boys, we do get to see the extent of their obsession as they watch the girls’ lives unravel. The writing was rather beautiful and it was definitely a good book. But, at the same time, it was hard for me to enjoy. I suppose it’s kind of like Citizen Kane: everyone knows it’s great, but less people actually like to watch it. Reading The Virgin Suicides dragged on a little bit, but I loved certain parts, especially with the girls and the tree and their communication with the boys through music over the phone. There were parts that made me ache, especially since I felt like the suicide of the four older Lisbon girls could have been preventable if their parents (and even the people in their neighbourhood) had acted differently. It was strange to read a story and feel on the outside of everything, knowing so little about the main characters. At the same time, I enjoyed how many things were left open for speculation. While this could be frustrating, I would recommend this book to people who like to analyse and read books that are unique. While so many authors couldn’t pull off a book like The Virgin Suicides, I think the lyrical writing saved it.

“Basically what we have here is a dreamer. Somebody out of touch with reality. When she jumped, she probably thought she'd fly.”
Posted by Nose in a Book at 05:06